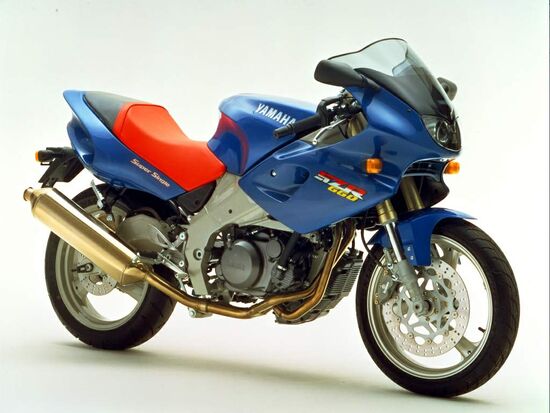 Yamaha SZR 660 was first introduced in 1995 and was produced until 1997 (official sales until 2001). The motorcycle was targeted at the European market and was specially designed by the Italian division of Yamaha Belgarda. Despite the official name "Yamaha SZR 660", in fact, the model was an independent development of an Italian company using imported components:

The frame of the Yamaha SZR 660 is a Deltabox aluminum structure similar to that found on the Yamaha TZR250 and Yamaha TZR125RR motorcycles.

The Yamaha SZR 660 engine migrated unchanged from the touring enduro Yamaha XTZ 660 Tenere, the main differences are in the carburetor settings. Like the XTZ660, the sports version of the SZR 660 is equipped with a Teikei Y26PV twin-barrel carburetor. The maximum power is 48 hp, the maximum torque is about 56 Nm.

Other features of the Yamaha SZR 660 include a 5-speed gearbox, a 14-liter fuel tank and 159 kg dry matter.

The Yamaha SZR660 was produced until 1997, after which it was discontinued. New motorcycle sales continued until 2001. In total, approximately 2,000 motorcycles were produced and sold. Currently, the model is extremely rare in the Russian Federation, it is also practically not presented at Japanese auctions, so the main opportunity to buy this motorcycle is to search for a suitable model in Europe.

With a modern take on the SZR 660, many would say that it is awkward and bears little resemblance to a sports bike, especially in terms of the engine. Meanwhile, in Europe to this day there is the Supermono racing class, in which the 1-cylinder sportbikes act, in the image and likeness of which the Yamaha SZR 660 was created. By the way, the racing version of the SZR 660, which had the same engine, produced 78 liters .with. and took part in the official Supermono-Rennen race.

The main competitors of the Yamaha SZR 660 in the class: