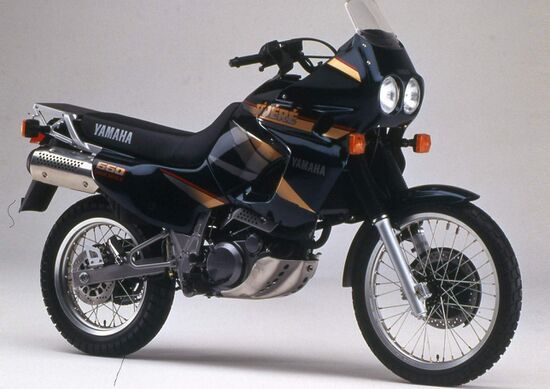 The Yamaha XTZ 660 Tenere appeared in 1991, replacing the outdated Yamaha XT600Z Tenere. The motorcycle was focused primarily on the European market, so the Yamaha XTZ660 Tenere is practically not found in Japan. In 1994, the motorcycle undergoes a slight restyling, getting similarities (plastic design, dashboard) with the older version Yamaha XTZ750 Super Tenere. And in 1996 the model was discontinued (official sales of new motorcycles continued until 1999 inclusive).

The Yamaha XTZ 660 Tenere was based on a 1-cylinder liquid-cooled engine with a volume of 660 cc. see, delivering 48 hp. power and 57 Nm of torque. Restyled versions produced up to 46 hp. and 56 Nm, which was due to small changes under the new environmental emission standards. Of the features of the motor, the head of the block with 5 valves and the lubrication system with a dry sump (oil in the frame) should be distinguished.

Other features of the Yamaha XTZ660 Tenere include a steel frame, advanced long-travel suspension in the form of a 43 mm telescopic fork and adjustable (preload + rebound) monoshock, front and rear disc brakes, a 20 liter fuel tank and only 195 kg of curb weight.

Despite the decent technical characteristics and the generally low price, the model was not widely used. At a certain stage, the motorcycle showed good demand (4500 units were sold in Germany alone), due to the then successful performance of Yamaha riders in the Dakar Rally. However, after restyling, the Yamaha XTZ660 Tenere was practically not sold, which forced Yamaha to suspend production in 1995 and resume it only in 1996, which did not change the situation and became the last year of the official life of the model on the production conveyor.

The main competitors of the Yamaha XTZ 660 Tenere in the class: