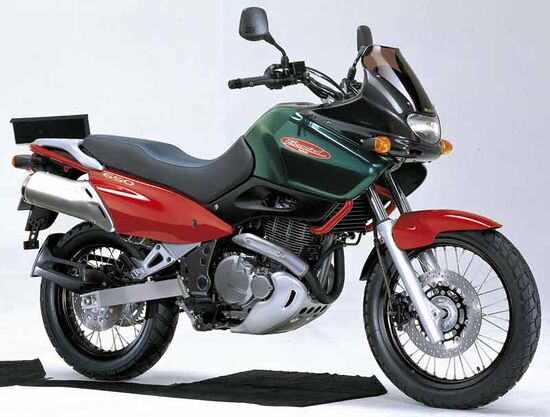 The Suzuki XF 650 Freewind was first introduced in 1997 as a response to European single-cylinder flagships - the BMW F650 and Aprilia Pegaso 650.

If we compare the Suzuki XF650 Freewind with the same Aprilia Pegaso 650, it turns out that these two motorcycles are very similar in appearance - the shape of the front fairing, the gas tank and plastic, the dimensions of the wheels, single disc brakes - all this is very similar to Aprilia. The tailpipe design and rear mudguard are very similar to those used on the 90s BMW F650.

Particular attention can be paid to the dashboard, which was completely digital and included a tachometer, speedometer, and a handy fuel gauge. This was not the case on competitors: all the instruments were analog, and the fuel reserve lamp could be found only in the Aprilia Pegaso 650, while the BMW F650 did not even have one.

The main feature of the Suzuki XF 650 Freewind is the 644cc, 1-cylinder, 4-stroke, air / oil cooled engine. see, delivering 48 hp. power and almost 52 Nm of torque. This motor did not become an independent development of Suzuki, but migrated from the series of off-road motorcycles Suzuki DR 650. The engine is characterized by confident traction from low to medium revs and gives its maximum performance at 5500-7000 rpm.

Comparing the Suzuki XF 650 Freewind engine with the Rotax engine installed on the main competitors (BMW F650 and Aprilia Pegaso 650), it should be noted that the Freewind 650 air-oil engine is simpler due to the lack of a liquid cooling system, one camshaft (SOHC) and the classic 4 -valve cylinder head (Aprilia Pegaso 650 has 5 valves). At the same time, in terms of power parameters, the Suzuki XF 650 Freewind is only slightly inferior to its European counterparts.