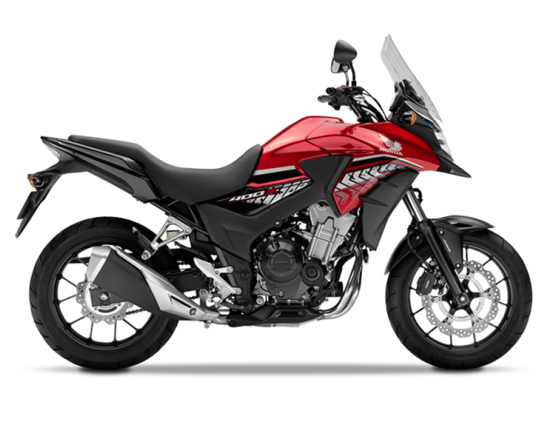 The budget crossover model "Honda CB400X" was introduced in 2013 as an internal Japanese modification of the model Honda CB500X. Both models are almost identical to each other and differ mainly in engine configuration and some dimensional parameters.

The Honda CB400X model is built on a common base with other similar models - Honda CB400F and Honda CBR400R.

It was based on an in-line 2-cylinder liquid-cooled engine with a volume of 399 cm³, producing 46 hp. power and 37 Nm of torque. The engine is identical to that installed on Honda CB500X and differs from it only in crankshaft stroke, increased compression ratio and other settings. By the way, the CB400X motor is inferior in power to the CB500X by only less than 2 horsepower.

Other features of the Honda CB400X include a steel frame, fuel injection system, simple suspensions, a 6-speed gearbox, versions with ABS and from 192 kg of curb weight.

For 2016, the model undergoes a facelift with an updated look, a taller windshield, adjustable front suspension preload, LED optics and adjustable steering levers.

For 2017, the model receives a new exhaust with a more modern design, which also meets new environmental standards.

The main competitors of the Honda CB400X in the class:

The officially declared fuel consumption of the Honda CB400X is 3.5 liters per 100 kilometers. The exact value depends on the riding style.