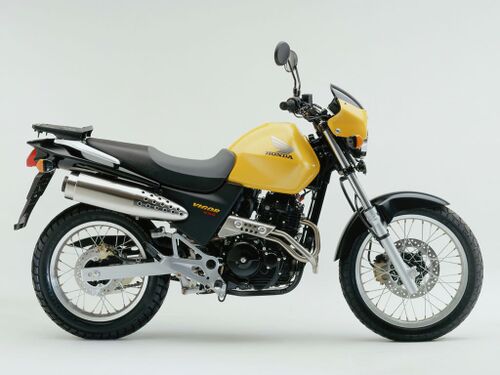 The road bike model Honda FX650 Vigor appeared on the market in 1999, essentially a restyling of the model Honda SLR650. However, both models continued to be produced in parallel until 2000 inclusive. The main sales market is European countries.

Unlike the SLR, the updated FX650 Vigor features a more modern and more road-going exterior, front half fairing, a different saddle shape and a new instrument panel with a tachometer. Slightly different in overall dimensions, the Vigor was no different from SLR650 in technical terms - it was also based on a 1-cylinder engine from Honda Dominator 650, producing the same 39 hp ... power and 54 Nm of torque. Suspension, frame and chassis were identical to the previous model.

Despite the restyling and a rather interesting concept of the motorcycle, it never gained popularity in Europe and already in 2000 finally rolled off the assembly line. Sales of new motorcycles continued until 2003, and in 2005 Honda introduced a new model based on this engine - Honda FMX650. However, it was not in high demand either, and by 2007 it had finally left the market.

Average official fuel consumption for the Honda Vigor 650 is 5.47 liters per 100 kilometers. The exact value depends on the speed and surface of movement.