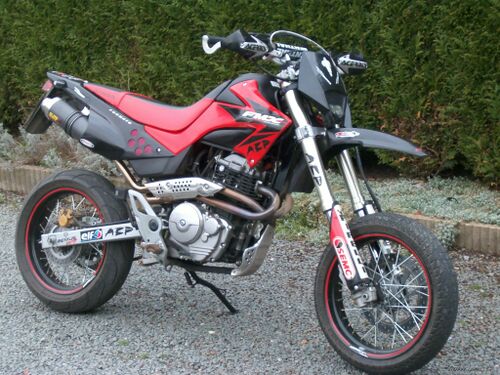 The motard (supermoto) model Honda FMX 650 was produced from 2005 to 2007. With this bike, Honda decided to enter the large motard market and compete with Yamaha with its Yamaha XT660X.

Up to this point, Honda has managed to adequately respond to the release of new classes of motorcycles - remember the model Honda XR400R Motard, which, although not so popular, still competed with Suzuki DR-Z400. However, in the case of the Honda FMX 650, this did not happen - the model turned out to be, if not a failure, then certainly uncompetitive. In any case, the model never became popular.

The Honda FMX 650 was based on an old 1-cylinder 644 cc engine. air cooling, which was installed on the motorcycle Honda NX650 Dominator. This motor, for its volume, showed very mediocre technical characteristics, giving out only 38 hp. power and 52 Nm of torque. For example, the Yamaha XT660X engine produced 48 hp. and 60 Nm.

Other features of the Honda FMX 650 include a steel frame, an inverted fork at the front and a mono-shock absorber with a progression at the rear, a 5-speed gearbox and 176 kg of curb weight.