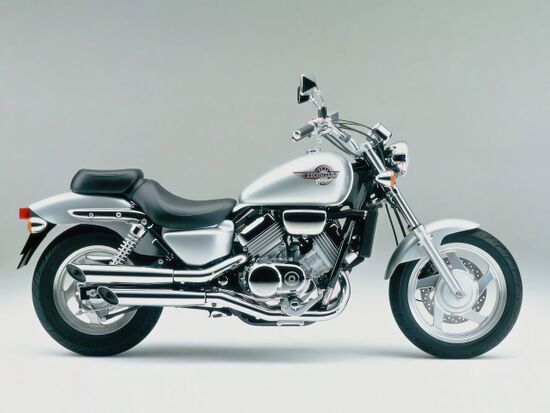 The Honda Magna 750 cruiser appeared in 1982 as a brother to the Honda VF750S Saber. The factory designation of the model is Honda VF750C. It became the first production V-4-cylinder cruiser from the sports tourist Honda VFR750. The model was available in Japan, Europe and North America.

The first modifications of the Honda Magna 750 had the classic look of Japanese cruisers of the time - short wheelbase, road fork, twin disc brakes, cardan drive and hydraulic clutch.

Since 1987, the model has been heavily redesigned with power cruiser features - a lower section, wide rear tires on a monolithic alloy disc, expressive tailpipes, a step saddle and a single disc front brake. This generation has a maximum power of 77 hp. (Japanese versions), export modifications (North America, Great Britain) produced up to 88 hp.

Since 1993, the Magna model has undergone another major restyling. Getting a more modern look, it is also equipped with a chain drive (instead of a cardan), a clutch cable (instead of hydraulics), a new engine with a modified timing system, a 5-speed gearbox (previous versions - 5-speed + OD (overdrive), new wheels and carburetors with oversized dampers.

2003 became the final year of production of the model, after which it left the assembly line and did not receive further development. Nevertheless, during the entire production period, the Magna 750 has won a huge army of fans all over the world, who still prefer this particular model.

The "little brother" of the model is Honda Magna 250.