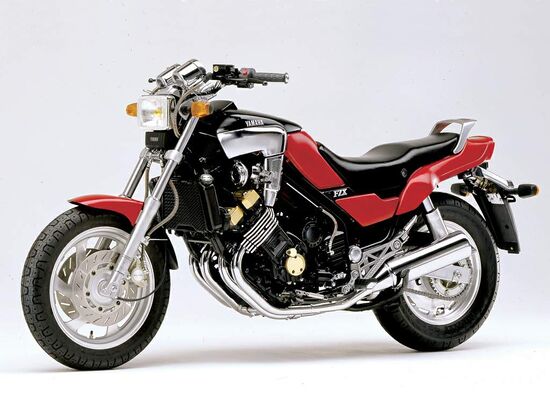 The Yamaha FZX 750 appeared in 1986 in the domestic Japanese market as a "little brother" Yamaha Vmax 1200.

The motorcycle was aimed at the Japanese market, but was also officially supplied to European countries. For a limited time, the model was available in the United States, but the engine capacity of the North American versions did not exceed 700 cm³ (this was due to the presence of customs restrictions on the import of motorcycles with a volume of over 700 cm³).

Models outside the Japanese market were sold with a Fazer attachment - '' Yamaha FZX750 Fazer . European models were visually distinguished by their color (Apple Red), but the 1993 versions for France were sold in Dark Grayish Blue Metallic. Intra-Japanese modifications of the FZX750 were available only in gray (Orion Silver) - the first generation; and dark blue (Dark Grayish Blue Metallic) - the second generation. In the last year of the motorcycle production in Japan, the model was painted in black and silver (New Silver Dust). Also, the export versions did not have a seat belt and were additionally equipped with a handle for the passenger.

The main difference between European and Japanese versions is the engine power - the maximum declared power of the Yamaha FZX750 Fazer in Europe reached 96 hp, while in Japan this characteristic did not exceed 77 hp. (the maximum revs were lower, but the torque was fully available already at 6000 rpm, instead of 8000 rpm - on the full-strength European versions). It should also be noted that not all European modifications of the Yamaha FZX750 Fazer were full-strength, but only with 1UF, 2AK, 3MU motors.

In 1990, the Yamaha FZX 750 model received serious technical changes that affected the engine (the power of the Japanese versions was reduced to 74 hp) and the gearbox - the 6-speed gearbox was replaced by a 5-speed one. Note that the change in the box was due to the desire of engineers to give the motorcycle more features of the "roadman" to the detriment of the dragster qualities. It is for this reason that the full-strength European modifications with a 6-speed gearbox, which have shorter gears and, as a result, a more powerful start, were especially appreciated.

In 1998, the model received an update to the exhaust system to meet new environmental standards and temporarily suspends production, resuming it only in 2000, by the end of which the motorcycle completely leaves the Yamaha production line. European modifications were discontinued by 1998.

The main competitors of the Yamaha FZX750 Fazer in the class: