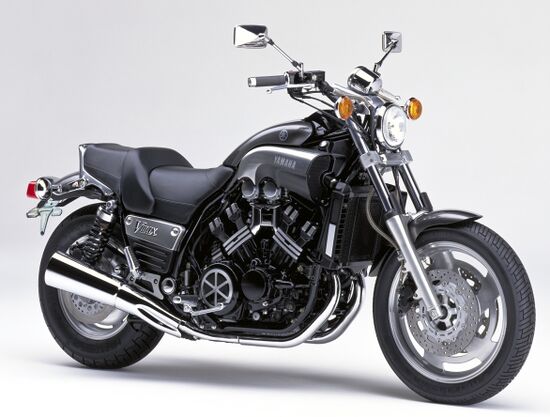 The Yamaha V-max 1200 was introduced in 1985, making its first appearance in the North American market. The motorcycle concept featured cruiser traits, a powerful 4-cylinder V-engine, and drag bike styling and ergonomics. The V-MAX 1200 was one of the first production-produced dragters with a classic appearance, delivering outstanding dynamic performance in 402 meter races.

The model was based on the engine from the Yamaha Venture Royale - a 4-cylinder V-shaped liquid-cooled block with a volume of 1198 cm3, producing up to 145 hp. power and up to 123 Nm of torque. The main feature of this motor is the presence of V-Boost technology, which was controlled by a servo drive, and by about 6,000 rpm, it opened additional throttle valves between the intake ports, thereby creating the effect of using large carburetors at higher rpm. The result of using this system is an increase in the amount of the incoming fuel-air mixture at high speeds, which ultimately leads to an additional increase in power by 10%. The V-Boost system was not installed on all Yamaha V-max 1200 motorcycles, but was mainly used in North American modifications.

Other features of the motorcycle include a simple layout with a steel duplex frame, classic suspension in the form of a conventional telescopic fork at the front and a double shock absorber at the rear, disc brakes, a 15 liter fuel tank, a 5-speed gearbox, a hydraulic clutch, a cardan drive and about 283 kg of curb masses.

In 1987, the model undergoes a slight restyling, receiving new rims and a modified saddle.

In 1993, the front suspension (more powerful fork), the braking system (increase in the diameter of the brake discs 282 → 298 mm, 4-piston calipers) and carburetors (Mikuni BDS34 → BDS35) are subject to changes.

In 2003, the Yamaha V-max 1200 receives changes to new environmental standards, reducing the maximum power to 135 hp. for USA model and up to 140 hp. for Canadian versions.

2007 was the last year of production of the model. This year's models are unified for 135 hp. power.

The main competitors of the Yamaha V-max 1200 in the class: