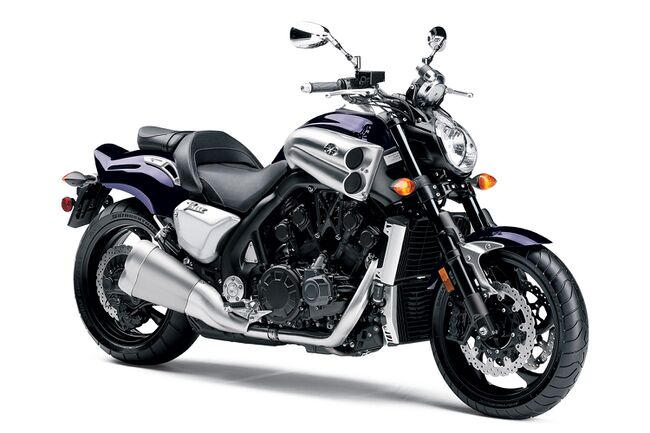 The Yamaha V-max 1700 was introduced as a concept at the 2005 Tokyo Motor Show and went into series production in June 2008.

The model is a continuation of the V-max series and is a successor to Yamaha V-max 1200. It should be noted right away that the official name of the Yamaha V-max 1700 sounds like Yamaha VMAX, without specifying the engine size and other letter designations. Currently, the motorcycle is included in the "Sport Heritage" class, according to the Yamaha classification, and is adjacent to such models as Yamaha XV950 Bolt, Yamaha XSR700, Yamaha XSR900 and Yamaha SR400.

The main feature of the Yamaha V-max 1700 is a 4-cylinder V-shaped (65 °) liquid-cooled engine, 1679 cc displacement, producing 200 hp. power and 167 Nm of torque. The maximum performance of the motor is reached at 6500-9000 rpm. Unlike the previous V-max, the new one is equipped with YCC-T (electronically controlled throttle valves) and YCC-I (variable intake length) systems. The latter is designed to provide a V-boost effect by reducing the length of the intake port by 6650 rpm and thereby creating a tangible lift, as in the Yamaha V-max 1200 with V-boost system. Yamaha's YCC-I system was first used on the 2006 Yamaha YZF-R1 sports car. And the first motorcycle to use a variable intake system was the MV Agusta F4 Tamburini. On Agusta, a similar system was called Torque Shift System (TSS).

The frame of the new Yamaha VMAX, unlike the previous version (there was a steel duplex), is a cast aluminum structure, the supporting element of which is the engine. The suspension has also undergone changes - now it is a 52 mm telescopic, fully adjustable, cartridge fork at the front and a fully adjustable mono-shock at the rear.

The braking system also deserves a separate mention. If on the old V-max it was a frankly weak point, then on the new VMAX this problem was solved - two 320 mm discs in front + powerful 6-piston Brembo radial calipers, coupled with a 1-piston caliper on a 298 mm disc at the rear. The braking system is additionally equipped with ABS.

However, the main characteristic of the VMAX was and remains dynamics - despite its almost 310 kg of curb weight, the Yamaha V-max 1700 gains 100 km / h in just 3.0 seconds, and the maximum speed is electronically limited to 221 km / h.