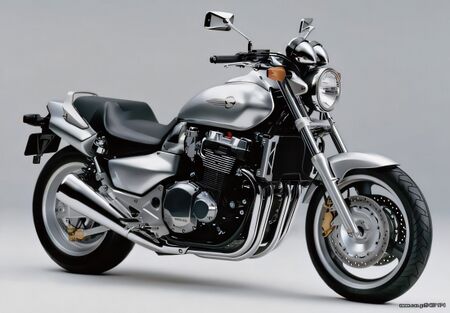 The Honda X4 was first introduced as a concept in 1995 at the 31st Tokyo Motor Show, and official series production began in March 1997. The Honda X4 was a domestic Japanese model, but a small proportion of the motorcycles went to Europe and the North American market.

Despite the fact that the X4 is often classified as a power cruiser, it is not entirely correct to call it such. The fact is that, in essence, the model is a special configuration of the Honda CB1300 model, differing from it only in appearance, carburetors and a number of other insignificant parameters. The relationship between the CB1300 and the X4 also gives the factory designation - the Honda X4 had the factory code CB1300DC . In addition, Honda itself has positioned the X4 as a "Powered Custom".

Since the inception of the Honda X4, many experts and users have presented Yamaha V-Max as the main competitor of the motorcycle, comparing both models that had some external similarities - for example, the shape of the exhaust system, the saddle, the rear of the motorcycle ... Although in concept they are completely different motorcycles - as noted above, the X4 is practically the same road builder Honda CB1300.

Speaking of the popularity of the Honda X4, it should be noted that the motorcycle had a rather low level of sales in the North American market. Critics of the time noted the motorcycle's low power (the V-Max 1200 produced up to 145 hp versus 100 hp in the X4), high fuel consumption and insufficient straight-line stability at high speeds. However, along with a failure, in some countries, the X4 has become a truly iconic model, which has gathered a whole army of admirers. Such countries include, for example, Germany.

2003 was the last year of production of the Honda X4, after which it disappeared from the Honda motorcycle line and did not receive further development.

Major generations of the Honda X4:

The main competitors of the Honda X4 in the class:

Average fuel consumption for a Honda X4 depends on the driving style of the pilots and the technical condition of the motorcycle, and is: