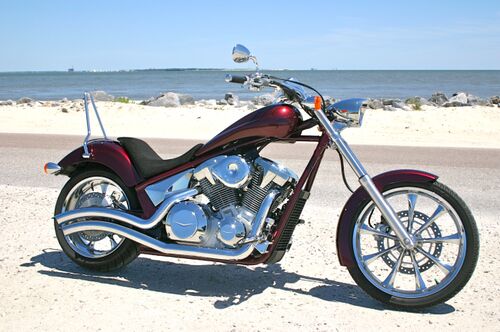 The Honda VT1300C engine, in comparison with the Honda VTX1300 engine, received an injector, different camshafts and an exhaust system. As a result, the motor began to produce about 58 hp. power and 107 Nm of torque. The exception is the Honda VT1300CS Saber version, which reaches 74 hp. and 123 Nm of torque.

Also an innovation of the Honda VT1300C series was the appearance of versions with a combined braking system ABS. Visually, models with ABS are distinguished by a 3-piston front and 2-piston rear caliper. In the name of models with ABS, there is an additional letter A - VT1300CXA, VT1300CRA, VT1300CTA, Honda VT1300CSA.

Despite the focus of the Honda VT1300C series on sales in many countries of the world, including South Africa, India, the United Arab Emirates, the model gained particular popularity in North America. Currently, as of 2017, the model is on sale only in the United States.

The main competitors of the Honda VT1300CX Fury in the class: