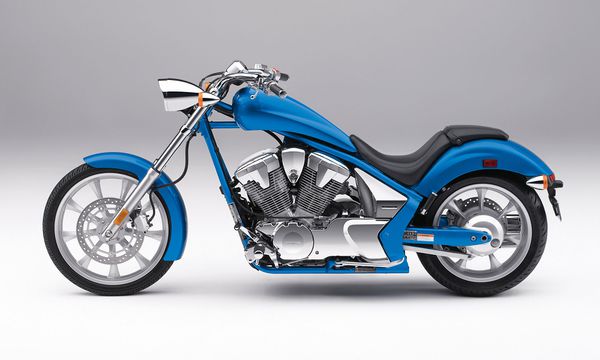 The Honda VT1300CX Fury cruiser was unveiled in January 2009 at the International Motorcycle Show in New York and went into series production and sale in May. Honda Fury is officially supplied to many countries of the world, but not everywhere it is called Fury - in some countries this model is called as “Honda VT1300CX” or “Honda VT1300CXA” (with ABS).

The model replaced Honda VTX 1300 and differs from it in almost everything - from the frame to the engine - the Honda Fury gets an injection engine with modified cams, cylinder head and exhaust system. As a result, the engine began to produce about 58 hp. power and 108 Nm of torque. For comparison, the old Honda VTX 1300 produced 75 hp. and 123 Nm.

Particular attention in the design of the Honda VT1300CX Fury was paid to the design, which was developed by specialists from Honda R&D Americas (HRA) in conjunction with Japanese engineers HGA. So, the model features a large 21 'front wheel, a tall handlebar, a low seat height and a thin teardrop-shaped fuel tank - all this makes the Honda VT1300CX Fury more like a custom than a serial factory cruiser. Also impressive is the tremendous work of designers and engineers to hide the motorcycle cooling system - the radiators and hoses have become so invisible that at first glance they don't even catch the eye. This is especially pronounced on the black version, where the motorcycle and radiator merge in the same color. The gearbox and brakes are similar to those used on the VTX 1300, but according to Honda, they have been modified and modernized - in particular, the front calipers receive another piston of the combined brake system, which brakes the front wheel when braking from the rear ... The cardan drive is also similar to the shaft from the previous model, but unlike it, it is enclosed in an aluminum swingarm.

The main competitors of the Honda VT1300CX Fury in the class:

The officially declared average fuel consumption of the Honda VT1300CX Fury is 5.9 liters per 100 kilometers.