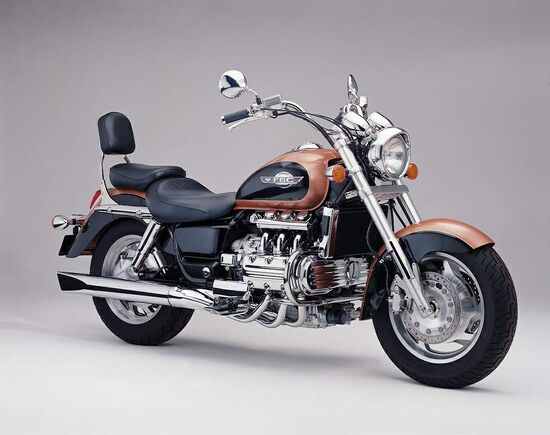 The cruiser model Honda Valkyrie 1500 was first introduced in 1996 and was produced until 2003. The model had a factory designation - Honda GL1500C , was sold in the United States under the name -' Honda Valkyrie 1500 , and in other countries was known as - Honda F6C . The abbreviation F6C stands for - Flat Six Custom - a cruiser with a 6-cylinder boxer engine.

The motorcycle was based on the engine from the luxury tourer Honda GL1500 Gold Wing with a number of changes and improvements. First, the engine was equipped with 6 carburetors, one for each cylinder (instead of 2 for Gold Wing 1500). Secondly, the engine received new camshafts, which significantly increased the dynamics of the motorcycle and increased the maximum engine speed. Thirdly, instead of hydraulic lifters, the Honda Valkyrie 1500 receives the usual valve clearance adjustment (screw-nut). Fourth, the bike gets a new 6-6-2 exhaust. As a result, the engine began to produce "clean" 100 hp. (on the wheel) and almost 140 Nm of torque.

In addition to engine improvements, the Honda GL1500C Valkyrie receives a new super-rigid steel frame, modified gearbox ratios and loses a reverse gear (except for the version for Japan - it had the ability to reverse reverse gear).

The Honda Valkyrie 1500 was produced only in the USA, at the plant in Marysville, Ohio. Most of the motorcycles were destined for the North American market, the rest were exported to Europe, Australia and Japan. The motorcycle became one of the first high-volume cruisers with an atypical layout for this class, in particular a 6-cylinder boxer engine. Nevertheless, the model turned out to be extremely successful and immediately gained wide popularity. A total of 48,420 motorcycles were produced and sold, of which only 6,670 were. ended up on the market in Europe and Australia.

Among other features of the Honda Valkyrie 1500, in addition to the 6-cylinder boxer engine, an inverted fork should be distinguished (the right feather - as a guide, the left - responds to damping), a timing belt drive, the presence of a motorcycle fall sensor (turns off the ignition when falling on its side), hydraulic clutch, disc brakes front and rear, 20L fuel tank (Interstate version - 26L) and 334 kg unladen weight (regular version).

The main modifications of the Honda GL1500C Valkyrie:

Despite the presence of interesting modifications of the Honda GL1500C Valkyrie motorcycle, they were not in great demand, and therefore were quickly discontinued. The basic classic version of the Honda Valkyrie 1500 remained available on the market until 2003, after which it also disappeared from sales. Instead, in 2004, Honda releases a limited edition model Honda NRX1800 Valkyrie Rune, built on the basis of a new version of Gold Wing 1800, and at the end of 2013 presents a new reincarnation of the F6C model - Honda GL1800 F6C Valkyrie.

The main competitors of the Honda Valkyrie 1500 in the class: