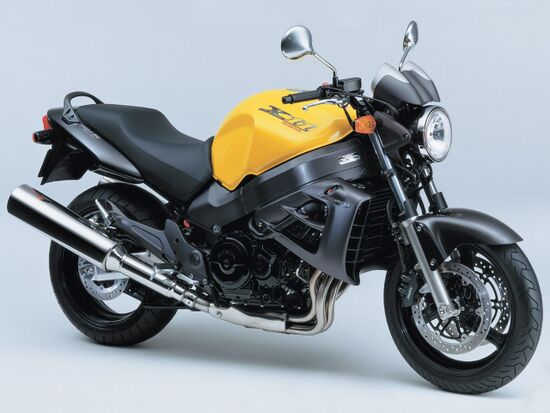 The naked model `` Honda X11 was first presented in the fall of 1999 at the Milan Motor Show and almost immediately was launched into a series and began its official sales. The model was targeted at two main markets - Japan and Europe. The name ' Honda X11 ' was used only for Japanese versions of the motorcycle, while in Europe the model was known as'Honda CB1100SF X11. The main difference between European and Japanese versions is the maximum speed (252 km / h versus 180 km / h with a limiter) and engine power (136 hp / 113 Nm versus 100 hp / 98 Nm).

The model was based on the sports tourist Honda CBR1100XX Blackbird, from which all plastic was removed and the engine was derated. However, the chassis of the "Drozd" was calculated under the conditions of the aerodynamic plastic body kit, so Honda engineers, in order to maintain the stability of the motorcycle at high speeds, had to modify and change the design of some body elements of the new Honda X11 (in particular, the radiator grille serves as a panels are designed to provide wind protection).

The main differences between the Honda X11 and the Honda CBR1100XX Blackbird are in the engine settings, which has become more derated, but with better traction at low revs; no plastic, 5-speed gearbox (instead of 6-speed) and a slightly less rigid frame.

Among the features of the Honda X11, an aluminum frame, a cable clutch (on Honda CBR1100XX Blackbird - hydraulic), an immobilizer, a combined brake system and a 22-liter fuel tank should be distinguished.

Comparing the model Honda X11 with Honda X4, it should be noted that these are two completely different motorcycles - both in class and in technical terms. Despite the similarity of names, these models have nothing to do with each other.

The creation of the Honda X11 motorcycle was the first attempt at the factory to remake a sports tourist into a full-fledged urban naked. However, despite the sporty technical characteristics, the overall reliability of the units and an interesting appearance, this model did not become popular, and after 2 years of production, in 2001, it completed its history. Official sales on the European market continued until 2003.

The main competitors of the Honda X11 in the class:

Officially declared fuel consumption on the Honda X11 it is 6.02 liters per 100 kilometers. The real consumption value, according to the owners, lies in the range of 7.1-9.5 liters.