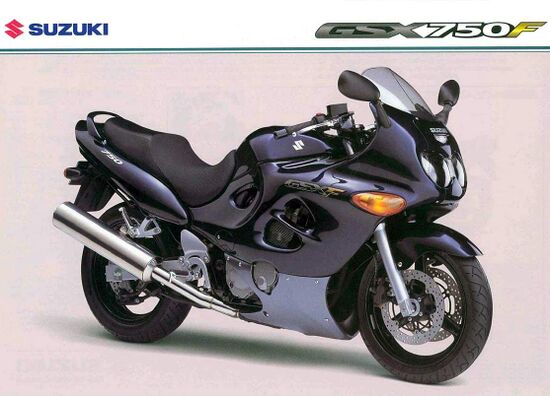 Suzuki GSX750F Katana hit the market in 1989 as the older model in the GSX-F line. Like the younger version ( Suzuki GSX600F Katana), the Suzuki Katana 750 was targeted at foreign markets (mainly Europe and North America) and was not sold in Japan. In general, comparing GSX600F and GSX750F, we can note a lot in common between these two models - both are built on the basis of the motor from Suzuki GSX-R750, both have identical appearance and both passed the same restyling.

The first generation Suzuki GSX750F Katana ( GR78A ) featured rectangular headlights, carburetors (Mikuni BST36SS) and more efficient engine settings (up to 106 hp in full-strength versions and 74 Nm of torque). This generation existed until 1997, after which there was a restyling.

The second generation Suzuki GSX750F Katana ( AK11 ) received a new look, dual headlights, new carburetors (Mikuni BSR36) and a decrease in maximum engine performance (up to 92 hp and 65 Nm of torque). This generation existed until 2006 inclusive, and it was this generation that gained wide popularity.

2006 was the last year of production of the model, after which it finally left the market and did not receive further development.

"Younger brother" of the model - Suzuki

`` The main competitors of the Suzuki GSX750F Katana in the class :