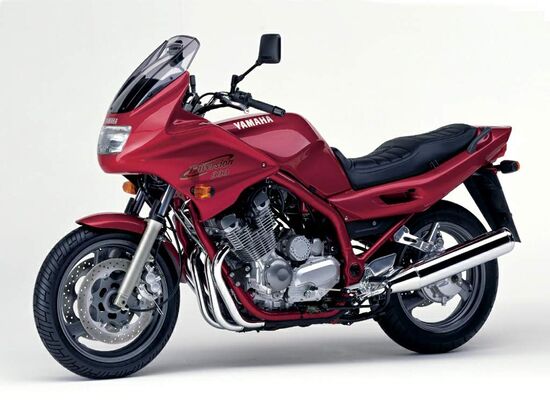 The Yamaha XJ 600 S Diversion appeared in 1992 as a replacement for the XJ600 and as a standalone model built on a new platform. Since 1994, a naked modification of the Yamaha XJ600N was introduced, which differed from the XJ600S in the absence of a front plastic fairing. It is also noteworthy that the XJ600N modification did not have a Diversion prefix.

The model was mainly export oriented, supplied to the countries of Europe, North America and Oceania, but in some years it was available in the domestic Japanese market.

In 1998, the model underwent changes with a thicker front fork and 2-disc front brakes.

2002 was the last year of production of the model, after which it finally left the market. It wasn't until 2009 that the modern successor to the Yamaha XJ600S Diversion was introduced - Yamaha XJ6 Diversion.

In general, the Yamaha XJ600S Diversion positioned itself as a budget simple motorcycle suitable for all categories of riders. In fact, for the price of 400 you could buy a full-fledged 600 cc model, which, although not distinguished by outstanding technical characteristics, significantly increased the ride comfort due to higher torque and a smoother power curve.

The main competitors of the Yamaha XJ 600 S Diversion in the class are: