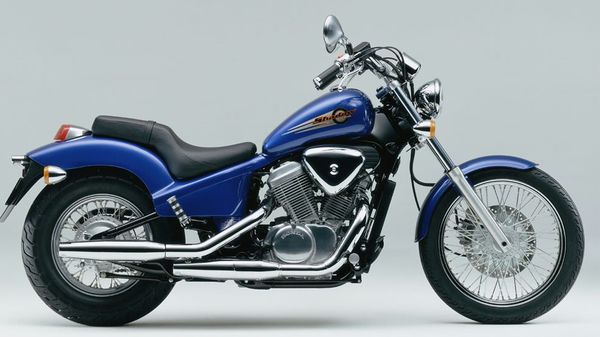 The '' Honda Shadow 600 cruiser model appeared in 1988 in parallel with Honda Steed 600, in contrast to which it was focused exclusively on foreign markets - mainly Europe, North America and Australia. Factory designation Shadow 600 - VT600C; Steed 600 - NV600C. Both models are almost identical to each other, but differ in engine settings (the Shadow is more forced), saddle, trim levels and changes from year to year.

The main modifications of the Honda Shadow 600:

Since 1994, the Honda Shadow 600 model has received an increased fuel tank (9.0 L -> 11.0 L), and since 1995, a slight decrease in power (41 hp -> 39 hp) and a new, wider steering wheel. Since 1999, the Shadow 600 VLX has received one carburetor instead of two, which simplifies construction and maintenance and makes the bike even more similar to American models.

Since 2000, updated environmental regulations for European countries have come into force, due to which the model officially leaves this market, continuing to be produced and sold for the North American market. Only by 2008, the Honda Shadow 600 VLX finally rolls off the assembly line and ends its history.

In the Russian market, the Honda Shadow 600 model is not very popular. This is due to the wider prevalence of the Japanese version Steed 600, as well as the high cost (especially the American Shadow 600 VLX of the 2000s), making the purchase of the Shadow almost impractical.

The main competitors of the Honda Shadow 600 in the class:

Average fuel consumption for the Honda Shadow 600 model, according to the test results, is 5.88 liters per 100 kilometers. The exact value depends on the riding style.