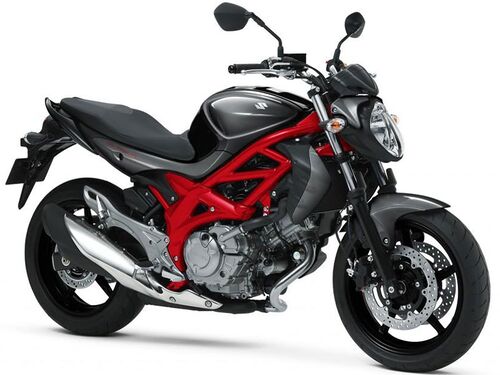 Suzuki SFV 400 Gladius appeared in 2009 as a successor of Suzuki SV400 and "younger" export version Suzuki SFV650 Gladius, on the basis of which Gladius 400 was built. The motorcycle was developed for the domestic Japanese market and was not officially exported to other countries.

Model Suzuki SFV400 Gladius is almost identical to Suzuki SFV650 Gladius, and differs from it only in engine size. Also Gladius 400 has ABS as standard ( Gladius 650 came standard with ABS only for European countries).

The model was based on a 2-cylinder V-shaped (90 °) liquid-cooled engine, 399 cc, producing 55 hp. power and 41 Nm of torque. Due to the characteristic blockage of the cylinders forward, this engine layout is often called L-shaped. The intake system is completely identical to the older version and is an injector with two 39 mm throttle valves and an SDTV system (Suzuki Dual Throttle Valve).

The undercarriage of the motorcycle is presented in the form of a steel tubular frame, simple suspensions (adjustable for preload) and a simple 2-piston braking system at the front (with ABS).

Unlike Suzuki SFV650 Gladius, the domestic Japanese Suzuki SFV400 Gladius was produced until mid-2017, after which it rolled off the assembly line and was no longer offered. Currently, this model is widely represented at Japanese auctions, which makes it available for purchase and export to the Russian Federation.

The lineup of the Suzuki Gladius series:

The main competitors of the Suzuki Gladius 400 in the class: