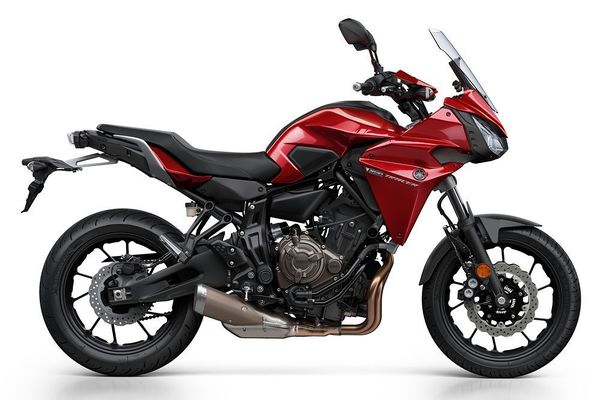 Yamaha MT-07 was first introduced in 2013, and official sales started in 2014. The model has been targeted at most of the global markets, including Japan, Europe, North America (since 2015 as FZ-07) and Oceania.

The MT series abbreviation literally stands for "Masters of Torque", ie "Torque Masters". The main feature of the engines of this series is not outstanding power capabilities, maximum torque in the widest range of work.

The main feature of the Yamaha MT-07 is the 689cc, liquid-cooled, in-line 2-cylinder engine. see, giving out about 75 hp. power and 68 Nm of torque. In this case, the value of the maximum torque is fully available already at 6500 rpm. The use of a 270 ° crankshaft made it possible to achieve the character of a V-shaped engine with a virtually in-line arrangement of cylinders. This technology is very similar to that of the TDM series and TRX 850. The cylinders themselves are displaced a few millimeters back (relative to the crankshaft), which reduced friction losses.

The rear suspension is a swingarm with a monoshock located almost horizontally to the ground, under the seat (inside the subframe), as close to the engine as possible. This arrangement was used on Buell motorcycles and allowed for the maximum centralization of mass without lengthening the wheelbase, which led to a tangible improvement in handling.

In 2016, based on the engine, frame and chassis of the Yamaha MT-07, a scrambler model was introduced - Yamaha XSR700. In the same year, a touring modification was introduced - the '' Yamaha MT-07 Tracer (also known as the Tracer 700 ). It was distinguished by the presence of a front fairing, an increased fuel tank and rear suspension settings (a little more travel). The Tracer is only available in the European and Australian markets.

In 2018, the Yamaha MT-07 model name becomes the main one in the North American market (instead of the past - Yamaha FZ-07).

At the end of 2018, Yamaha announced a touring enduro model Yamaha Ténéré 700, based on the MT-07 engine.