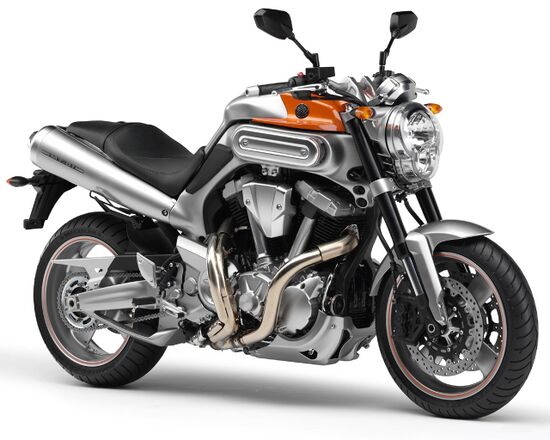 Yamaha MT-01 was first presented in 1999 at the Tokyo Motor Show, and went into series since 2005. The model was produced and sold until 2012 and was available in the markets of Japan, Australia, India, Europe and North America.

The Yamaha MT-01 was based on the engine from the cruiser Yamaha XV1700 Warrior, enclosed in a naked aluminum frame with suspensions and brakes from the sports Yamaha YZF-R1.

It should be noted that the construction of naked bikes based on large cruiser engines is not limited to the Yamaha MT-01 model - in 2001, the same Yamaha launched a motorcycle BT 1100 Bulldog, which was also a naked with 2- cylinder V-twin from the cruiser Yamaha XVS1100.

The main feature of the Yamaha MT-01 is an air-cooled, 2-cylinder V-twin engine with a displacement of 1670 cc, producing 90 hp. power and 150 Nm of torque. The motor is tuned for traction from low revs, and produces maximum performance at 3750-4750 rpm. Also for the first time on 2-cylinder engines, Yamaha used the EXUP technology (a valve in the exhaust manifold that changes the exhaust cross section depending on the rpm), which until this moment was installed exclusively on sports models.

Other features of the model include an aluminum frame, 5-speed gearbox, chain drive, hydraulic clutch, and sports suspension and brakes from Yamaha YZF-R1.

For 2007, the Yamaha MT-01 is updated with new 6-piston front calipers and slight changes in appearance.

2009 was the last year of motorcycle production, after which it finally rolled off the assembly line and did not receive further development.

The main modifications of the Yamaha MT-01:

Despite the non-standard layout of the motorcycle, as well as a solid curb weight of 265 kg, most experts in their reviews noted excellent handling (comparable to Ducati) due to the aluminum frame and sports suspension, as well as the imperceptibility of the huge weight of the bike due to the lowest center of gravity.