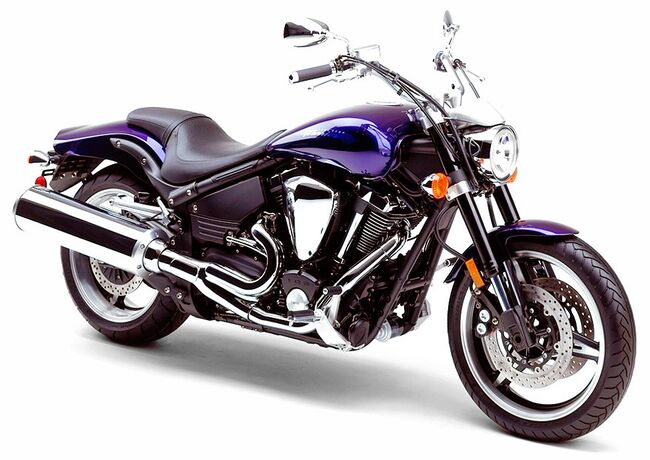 The Yamaha XV 1700 appeared in 2002 and started with the Yamaha XV1700 Road Star Warrior. The model was built on the basis of a new engine, which was based on the engine from the previous version Yamaha XV1600, which increased its volume from 1602 to 1670 cm³, received a new cylinder head, an injection system with two throttle valves and a "sports" exhaust system, which allowed this engine to produce up to 84 hp. power and up to 135 Nm of torque.

By itself, the Yamaha XV1700 Road Star Warrior positioned itself in the style of a power cruiser and was distinguished by a number of technological solutions: an aluminum tubular frame, an inverted fork, powerful front brakes from the sports R1. Since 2005, the Yamaha XV1700 Road Star Midnight Warrior modification has been available, which was distinguished by a black color and a minimum amount of chrome parts.

In 2004, the successor to Yamaha XV1600 was finally introduced - the Yamaha XV1700A Road Star. The visually knitted versions of this model were practically indistinguishable from the previous XV1600s. However, in parallel, versions with alloy wheels and touring modifications of the Silverado were offered, which differed in a touring body kit - a backrest, leather trunks, a windshield, etc. Silverado was also available with spoke or alloy wheels.

In 2005, a modification appears `` Yamaha XV1700 Road Star Midnight Silverado - a version similar to the Silverado with alloy wheels, but in a black color and with plastic lockable cases.

The Yamaha XV1700A was based on the Yamaha Warrior engine with different cylinder heads, exhaust system and carburetor power system. This engine was in many ways reminiscent of the engine from the previous version of the XV1600. It is noteworthy that Yamaha has not officially announced the maximum performance of this engine, so many sources indicate performance that is similar to the Warrior engine. Nevertheless, it was possible to find the American data obtained from the dino-stand, characterizing the power and torque at the rear wheel - 61.1 hp. / 126.2 Nm.

2006 was the last year of production for the Silverado with alloy wheels, and 2007 for the regular Spoked Road Star.

For 2008, the Yamaha XV1700A gets a fuel injection system instead of a carburetor. S-modifications of the Road Star also appear, which differed in the chrome package.

2010 was the final year of production for the Warrior and the spoked version of the Silverado.

2015 was the final year of production for the classic and touring version of the (Silverado) Road Star, after which they left the market and were no longer offered.

The main competitors of the Yamaha XV1700 in the class: