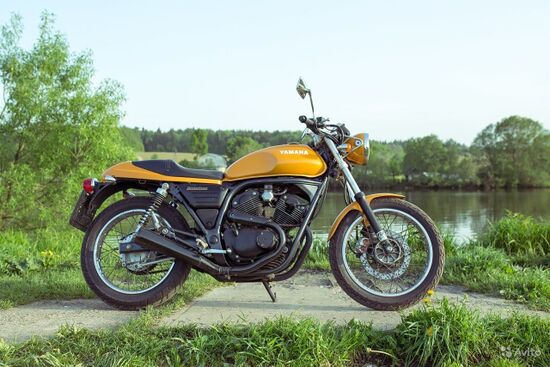 The Yamaha SRV 250 entered the domestic Japanese market in 1992. The model was a motorcycle of a classic layout with an air-cooled 2-cylinder V-engine, taken from Yamaha Virago 250 and delivering up to 27 hp. power.

In 1993, the SRV250 lineup was replenished with more modifications: '' Yamaha SRV250S (version with a small visor, rear shock absorbers with remote reservoirs and two-tone tank paint) and Yamaha SRV250T (similar to the regular version + trunk in place passenger seat).

Since 1995, the Yamaha SRV 250 has been available in the Oceania market.

In 1996, the model undergoes a restyling and is replaced by a new model - '' Yamaha SRV250 Renaissa . This generation was distinguished by the shape of the headlight, frame, dashboard, seat and rear. The coloring has also changed - now the model was available in silver, yellow and orange. Since 1997, this generation has been available in the Oceania market, while this was the last production year for the Japanese market.

1998 was the last year of the model's release, after which it finally left the market and did not receive further development. It is also worth noting that the Renaissa prefix was used only in the Japanese market - in the Oceania market, this model was sold as the Yamaha SRV250J (1997) and Yamaha SRV250K (1998).

Of the features of all modifications of the Yamaha SRV250, it should be noted a simple steel frame, suspensions in the form of a conventional telescopic fork in front and a double shock absorber in the rear, front disc and rear drum brakes, spoked wheels with 18 ', a 5-speed gearbox and a minimum curb weight of 152 kg.

The main competitors of the Yamaha SRV 250 in the class: