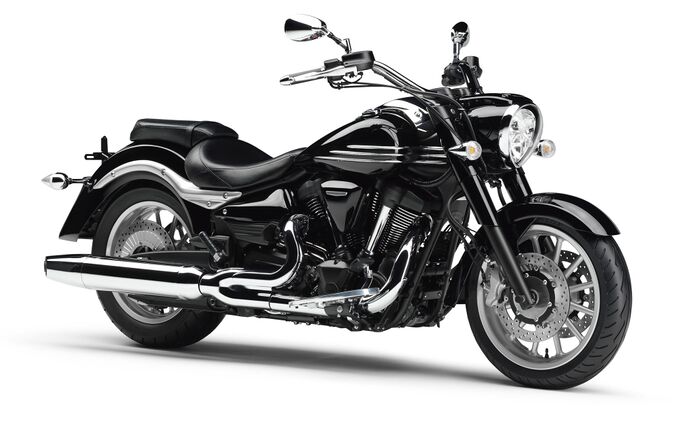 The Yamaha XV1900 series of cruisers first appeared in 2006 with the classic Yamaha XV1900A Midnight Star (Roadliner in North America) and the Yamaha XV1900CT Stratoliner touring version. In parallel, S-modifications (in a chrome package) and Midnight versions (in black instead of chrome) of these models were also offered.

The Yamaha XV1900 is based on an aluminum tubular frame and a 2-cylinder V-shaped air-cooled engine with a volume of 1854 cc, with a lower camshaft, producing up to 100 hp. power and up to 168 Nm of torque. This motor has a lot in common with the XV1600 and XV1700 engines. This engine was subsequently also installed on Yamaha Star Venture.

In 2008, a new modification is added to the line - '' Yamaha XV1900CU Raider . It is a custom version with aggressive styling and a 210mm wide rear wheel. In parallel, the S-version was also offered in a chrome package (the main visual difference is the chrome-plated fork glasses).

In 2010, the lineup is expanded again with a new batwing version - the Yamaha XV1900CFD Stratoliner Deluxe.

In 2015, a new limited Raider is offered, which is called the Raider Bullet Cowl '. It featured an original paint job and a front half fairing.

In 2014, the Stratoliner Deluxe modification was discontinued, and in 2015 the same fate affected the classic version of the Roadliner.

2016 was the final year of production for the Stratoliner, as well as other versions of the Raider (Raider S, Raider Bullet Cowl). Thus, only the basic modification of the Raider remained on the market, which also left the market in the next (2017) year.

The main competitors of the Yamaha XV 1900 in the class: