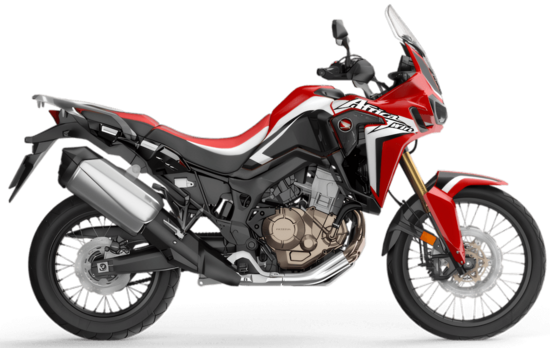 The Honda CRF1000L Africa Twin enduro touring motorcycle was first presented at the 2014 EICMA show in Milan. Then it was a prototype of a future motorcycle, hidden by camouflage, so it was more or less possible to consider only the forms of the new "Africa". However, from the end of 2015, the Honda CRF1000L Africa Twin will be available in the UK and from March 2016 in the US and Russia. In fact, the appearance of this model was due to the desire of Honda to resurrect the once legendary Honda XRV 750 Africa Twin and present to the market a new flagship in the Touring Enduro class, which would compete with European leaders - BMW R1200GS, Ducati Multistrada and Triumph Tiger Explorer.

Despite the release in 2012 of the model Honda VFR1200X Crosstourer, intended to replace Honda XL1000V Varadero, this model is still a more compromise motorcycle designed for use on good roads - a powerful 4-cylinder the engine, aluminum frame and low-travel sport suspensions all spoke more about the bike's road design. "Africa" ​​was famous for the fact that it could drive at the same speed on absolutely any surface - from a plowed field to gravel tracks. That is why Honda XRV750 Africa Twin is in great demand to this day, and this is what Honda engineers decided to focus on when creating the new Honda CRF1000L Africa Twin.

The Honda CRF1000L Africa Twin is based on a completely new 2-cylinder in-line engine with a volume of 998 cc. see, giving out 95 hp. power and 98 Nm of torque. The motor is tuned for strong traction from low to medium revs, showing maximum performance at 6000-7500 rpm. The engine also features a 270 degree angle between the cranks and the Unicam timing system.

The main Japanese competitors of the Honda CRF1000L Africa Twin in the class are:

The officially declared fuel consumption for the Honda CRF1000L Africa Twin ranges from 3.12 liters (Japanese calculation method: at a constant speed of 60 km / h) to 4.62 liters (WMTC method) per 100 kilometers. The exact value depends on the riding style, the surface and the load on the motorcycle.