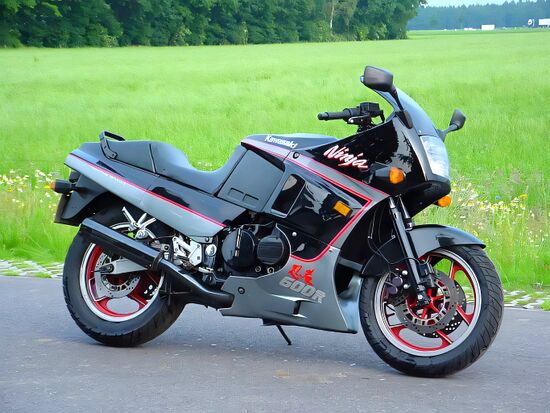 The Kawasaki GPX600R sports bike model entered the market in 1988 as a successor to the Kawasaki GPZ600R. In the North American market, both models were sold under the name Kawasaki Ninja 600R and had no division into GPZ and GPX.

The Kawasaki GPX600R was an export model and was only sold in the European and North American markets. A 400 cc version Kawasaki GPX400R was offered for the domestic Japanese market. It is worth noting that the domestic Japanese modifications of the GPZ were equipped with an aluminum frame from the very beginning (only the GPX received a steel frame), while the GPZ600 and GPX600 came with a steel frame (the only exception is the American version of the 1987 Ninja 600RX).

The Kawasaki GPX 600 model existed on the market until 1997 inclusive, after which it finally left the assembly line, giving way to the Kawasaki ZZ-R600 and Kawasaki ZX-6R models.

The main competitors of the Kawasaki GPX 600 in the class: