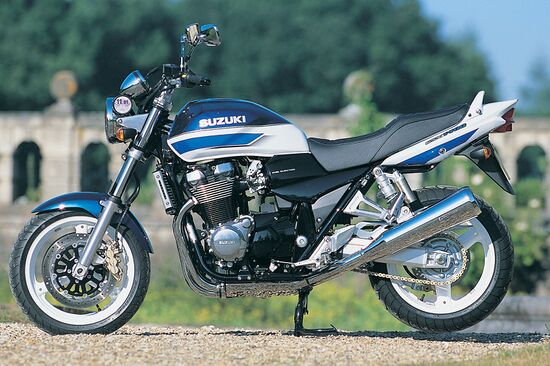 The Suzuki GSX 1400 appeared in 2001 in the Japanese and Australian markets, and since 2002 has become available in Europe. Japanese modifications are "strangled" to 100 hp. (full-strength - 106 hp) power and up to 180 km / h maximum speed (full-strength ~ 240 km / h). Visually, the Japanese versions are distinguished by red rear springs, while the export ones came with silver springs (with the exception of the black 2005 models, they also had red springs).

The Suzuki GSX1400 was based on an in-line 4-cylinder air-oil-cooled engine with a volume of 1402 cm³, producing up to 106 hp. power and up to 126 Nm of torque. Maximum performance - from 5000 to 7000 rpm. The engine was built on the basis of the engine from Suzuki GSF1200 Bandit, which was significantly redesigned (increased bore and crankshaft stroke), added SDTV (Suzuki Dual Throttle Valve) fuel injection system with double chokes. In 2005, aluminum cylinders were coated with the new SMEC (Suzuki Composite Electrochemical Material) composite coating.

In 2006, updated environmental emission standards for European countries were released, which actually meant an imminent ban on sales of the GSX 1400 in Europe, but the model continued to be delivered until 2007 inclusive.

2008 was the last year of production for the Japanese and Australian markets. This year, Suzuki launches a special version of the GSX1400 model in blue, white and blue colors and a red SUZUKI lettering on the tank, after which it finally removes it from the assembly line.

The main competitors of the Suzuki GSX 1400 in the class: