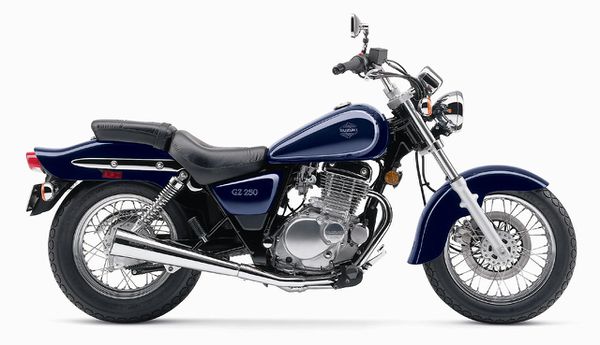 The Suzuki GZ250 Marauder appeared at the end of 1998 as a junior version in the Marauder / Desperado line, targeting the markets of North America, Europe, Australia and Japan. Sharing similarities with the Suzuki VZ400 Desperado and Suzuki VZ800 Desperado (Marauder) models, the Marauder 250 has nothing to do with them technically. The model also has the name - ' Suzuki Marauder 250 .

The Suzuki GZ250 Marauder was based on a 1-cylinder air-cooled engine with a volume of 249 cm³, producing up to 21 hp. power and 20 Nm of torque. The maximum performance is at 6000-7500 rpm. The main feature of the engine is the Twin Dome Combustion Chamber (TDCC). The engine did not become an independent development, but migrated from the Suzuki TU250 and Suzuki GN250 models.

In the early 2000s, due to low demand, the model left the domestic Japanese market, but there was still little demand for the model and some of the motorcycles oriented to foreign markets were all brought to Japan.

2011 was the last year of production of the model, after which it finally rolled off the assembly line and was no longer offered. The Marauder 250 is most popular in North America, which is why most of the models are present there.

The Suzuki GZ250 Marauder is great for beginner riders and those looking for a lightweight, inexpensive and economical classic bike for city riding. Thanks to the use of simple solutions, motorcycle maintenance is quite cheap and does not require any special skills and tools.

The main competitors of the Suzuki GZ250 Marauder in the class: