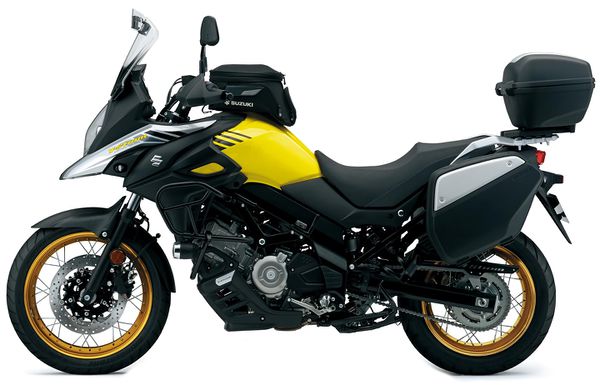 The Suzuki DL 650 V-Strom was first introduced in 2004 and is still in production today.

The model is the "younger brother" of the flagship version Suzuki DL 1000 V-Strom, shares a number of common parts with it and is built on a redesigned naked engine Suzuki SV650. The main differences between the V-Strom 650 engine and SV650 include other camshafts, a crankshaft with an inertia increased by 4%, a slightly modified filter box and exhaust. In addition, unlike the cast iron block SV650, the DL650 block is built using the patented SCEM (Suzuki Composite Electro-chemical Material) technology, using an alloy of nickel, phosphorus, carbide and silicon for lighter weight, improved heat transfer and minimal clearance between the piston and the cylinder. This coating resembles nikasil in its characteristics.

In 2007, the Suzuki DL650 V-Strom gets modifications with ABS and 2 plugs per cylinder.

In 2012, the model undergoes a serious restyling, changing the appearance, reducing the fuel tank capacity from 22 to 20 liters, increasing the rear suspension travel by 9 mm and slightly increasing the engine performance. The intake system is now equipped with double throttle valves (SDTV - Suzuki Dual Throttle Valve).

In 2017, the model undergoes another restyling and gets the appearance of the older version Suzuki DL 1000 V-Strom. The maximum power rises to 71 hp.

Among the features of the Suzuki DL650 V-Strom, an aluminum frame, adjustable long-travel suspensions, the presence of versions with ABS, the presence of "off-road" versions (XT), a 22-liter fuel tank (from 2012 - 20 liters), a 6-speed gearbox and up to 216 kg of curb weight.

The Suzuki V-Strom 650 is currently the most powerful and lightest motorcycle in its class and similar displacement compared to any other Japanese motorcycle manufacturer.

The main competitors of the Suzuki V-Strom 650 in the class: