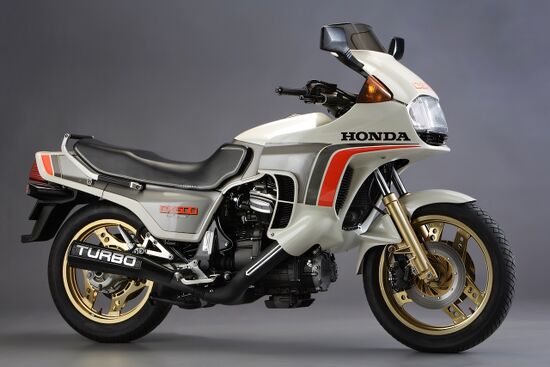 The Honda CX500 Turbo sports touring model was officially introduced in 1981 (MY 1982) mainly for the export markets of North America and West Germany. The model was built on the base version of the Honda CX500, but featured advanced front wind deflectors, electronic fuel injection and a turbine. The Honda CX500 Turbo was the first production Honda motorcycle with programmable fuel injection and turbocharging, which increased the maximum power from 50 to 82 hp, compared to the base version.

Another important feature of the Honda CX500 Turbo, like the entire CX500 line, is the 2-cylinder V-engine liquid-cooled, located in the frame longitudinally (like on Moto Guzzi motorcycles), with a camber angle of the cylinders of 80 °. It is also noteworthy that at first the longitudinally located V-shaped (90 °) engine, when tested by the pilots, turned out to be extremely inconvenient ergonomically (the legs rested against the carburetors) - to solve this problem, the engineers had to reduce the camber to 80 °, and turn the block heads by 22 ° relative to the cylinder axis. The motor is equipped with 4 valves per cylinder and a lower camshaft. Also, unlike the basic version, the Honda CX500 Turbo model received a reinforced clutch and gearbox.

Other features of the Honda CX500 Turbo include a steel frame, pneumatically adjustable suspensions (the front fork has a TRAC anti-bite system - Torque Reactive Anti-dive Control), disc brakes, a 20 liter fuel tank, a 5-speed gearbox and 260 kg of curb weight.

1982 was the last year of production of the Honda CX500 Turbo, after which it was replaced by a new model Honda CX650 Turbo, which, however, also lasted only one year.

The average fuel consumption for the Honda CX500 Turbo is 4.7 to 7.8 liters per 100 kilometers. The exact value depends on the riding style.