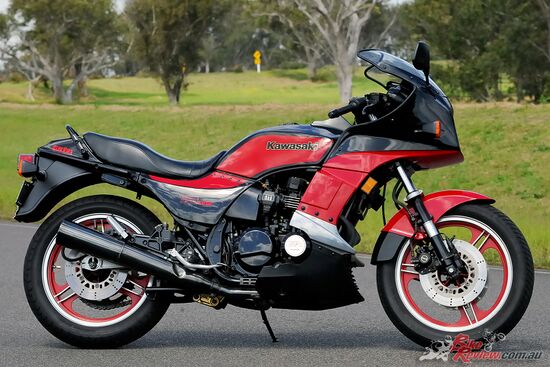 The Kawasaki GPZ750 Turbo sport-touring motorcycle was first introduced as a concept at the 1981 Tokyo Motor Show. At that time it was a motorcycle with a 650 cc engine. At the end of 1983, the company introduced a production model based on the Kawasaki GPZ750, equipped with a turbocharger and called the Kawasaki GPZ750 Turbo. However, in the markets of different countries, the motorcycle could have other names - Kawasaki 750 Turbo (North America) and Kawasaki Z750 Turbo (West Germany). Also noteworthy is the fact that Kawasaki exported the model to the American market in the form of spare parts and already there assembled the motorcycle to a finished state. This measure was forced and pursued only one goal - to bypass the import tax levied in those years on all motorcycles imported into the United States with an engine capacity of more than 700 cm³.

Despite the fact that the Kawasaki GPZ750 Turbo model was built on the basis of the regular version of the GPZ750, it did not differ only in the presence of a turbine - many parts were created specifically for the GPZ750 Turbo: pistons with a reduced compression ratio, a fuel injection system (DFI - Digital Fuel Injection), reinforced gearbox parts, modified oil pan with additional oil pump, aluminum Uni-Trak swingarm, modified exhaust system.

Thus, the maximum power of the Kawasaki GPZ750 Turbo was 112 hp, and the torque was 99 Nm. The outstanding performance of those years was praised by many motorcycle publications, calling the Kawasaki 750 Turbo perhaps the fastest motorcycle ever tested. Also, the model was recognized as the most successful of all Japanese turbocharged motorcycle models.

Among the features of the Kawasaki GPZ750 Turbo are a steel frame (aluminum swingarm), pneumatic adjustable suspensions (the front fork has an anti-sag system), disc brakes with 1-piston calipers, an in-line 4-cylinder air-cooled engine, 5-speed gearbox, chain drive , a fuel tank of 17 liters and 253 kg of curb weight.

1985 was the last year of production of the model, after which it finally left the market and did not receive further development.