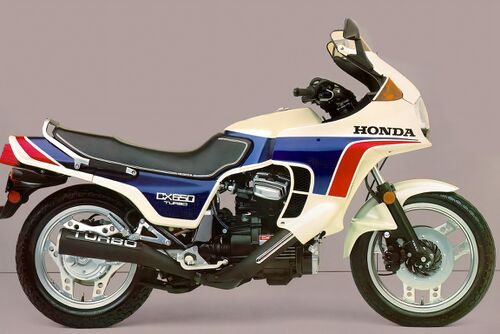 The sports tourist model Honda CX650 Turbo was introduced in late 1982 as the successor to the Honda CX500 Turbo. The model was focused mainly on the North American market (out of the total number of motorcycles produced in the amount of 1777 units, 1200 units were sold in the USA and Canada).

Among the features of the model, one can single out a steel frame, pneumatic adjustable suspensions (the front fork has an anti-bite system TRAC - Torque Reactive Anti-dive Control), disc brakes, a 20 liter fuel tank, a 5-speed gearbox and 256 kg of curb weight.

1983 was the first and last year of production of the model, after which it left the market and did not receive further development. Despite the unique, at that time, technologies, motorcycles were in very weak demand due to the high cost and increased insurance premiums.

The officially declared fuel consumption of the Honda CX650 Turbo is 5.14 liters per 100 kilometers. The exact value depends on the riding style.