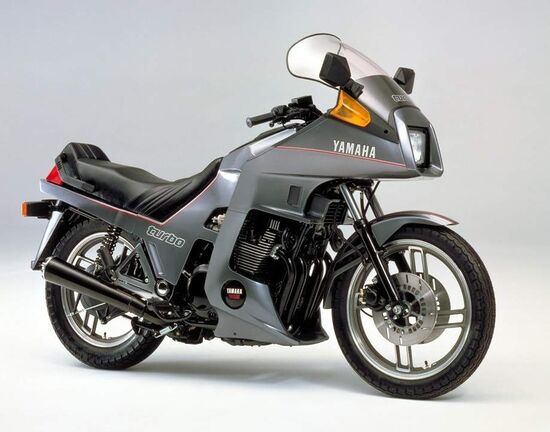 However, like other turbocharged Japanese motorcycles of the time, the Yamaha XJ650 Turbo was very expensive and had low sales. In 1983, the motorcycle was featured in one of the James Bond films - "Never Say Never Again".

The Yamaha XJ650 Turbo is based on an in-line 4-cylinder air-oil cooled engine with a volume of 653 cc, producing 90 hp. power and almost 82 Nm of torque. Unlike similar Japanese models with a turbocharged engine, the Yamaha XJ650 Turbo was distinguished by cheaper equipment - in particular, the use of carburetors, instead of electronic injection, a rear drum brake (competitors had disc brakes front and rear) and a double rear shock absorber (similar models from other manufacturers used a more modern monoshock and even progressive swingarms - Honda's Pro-Link and Kawasaki's Uni-Trak). In addition, the motorcycle from Yamaha, compared to competitors, looks more outdated (by modern standards).

Other features of the Yamaha XJ650 Turbo include a steel tubular frame, simple suspension in the form of an air fork at the front and a double shock absorber at the rear, a front disc and rear drum brake, a 15.5 liter fuel tank, a 5-speed gearbox, a cardan drive and 249 kg curb masses.

1983 was the last year of production of the Yamaha XJ650 Turbo, after which it finally left the market and did not receive further development.