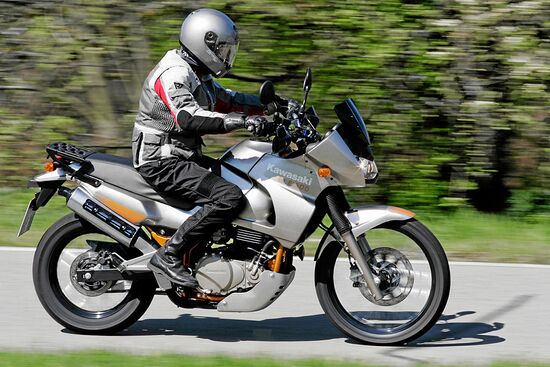 The Kawasaki KLE 500 '' appeared in 1991 and was focused on the European market. For the domestic Japanese market, a 400 cc version was built - Kawasaki KLE 400. In 2005, the Kawasaki KLE 500 underwent a small restyling, which affected the design of the front of the motorcycle, the dashboard and the exhaust system (under the new Euro environmental standards). 2007 was the last year of production for the model, which was replaced by Kawasaki Versys 650.

At the core of the Kawasaki KLE 500 was an engine from the sporty Kawasaki GPZ500, which has been re-tuned and derated to increase torque in the low and mid-range. The engine itself is an in-line 2-cylinder liquid-cooled block with a volume of about 500 cubic meters. see, delivering 48 hp. power and 42 Nm of torque. Since 2005 and the introduction of updated environmental standards, the engine began to produce 45 hp. power and 41 Nm of torque. Despite the attempts of Kawasaki to make the motor high-torque, it has not lost its sporting roots, showing maximum performance at rather high revs - 7500-8500 rpm.

The chassis of the Kawasaki KLE 500 is presented in the form of a simple tubular frame, long-travel suspensions in the form of a conventional telescopic fork at the front and a progressive monoshock at the rear, spoked wheels in dimensions 21 'and 17'.

Other features of the motorcycle include a 15-liter fuel tank, 6-speed gearbox and 181 kg of dry weight.

The lineup of the Kawasaki KLE series:

The main competitors of the Kawasaki KLE500 in the class: