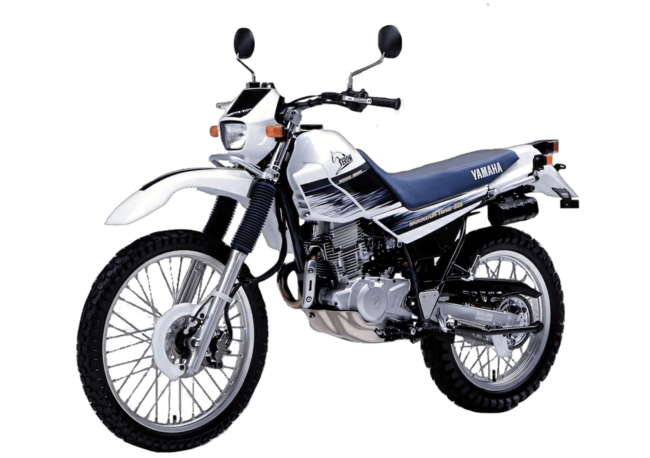 Yamaha XT225 Serow begins its history since 1985 - it was then that a motorcycle with the name ' Yamaha Serow ' (factory designation XT225W ) appeared on the domestic Japanese market. The model featured simple equipment - an air-cooled 1-cylinder 2-valve engine, simple long-stroke suspensions, a steel frame, a rear drum brake, a 7.6 liter fuel tank and a kick starter.

By the way, the Serow prefix was used only on intra-Japanese motorcycles, and meant "Serau" or "Serow" - a genus of artiodactyl mammals from the bovine family, an average size between a deer and a goat, living in the mountains of Japan, China, India and some other regions of Southeast Asia ... The concept of the motorcycle, as conceived by Yamaha, just reflected the character and endurance of this animal, capable of covering long distances on forest trails in mountainous terrain.

In 1989, the Yamaha XT225W Serow undergoes minor changes, with minor visual differences, an electric starter and an enlarged fuel tank (7.6 → 8.8 L). Since 1992, this generation begins to be officially sold in foreign markets - in particular, in Europe and North America. Export modifications do not have the letter W in the name (Japanese versions are always designated as XT225W or XT225WE) and Serow prefixes. Also, the export versions did not undergo those changes that concerned domestic Japanese modifications.

In 1997, the Yamaha XT225W Serow undergoes another change, with an increased fuel tank (8.8 → 10 L) and tubeless tires. Also from this year, domestic Japanese versions receive the letter E in the name - Yamaha XT225WE Serow.

The last modification to the Japanese model was made in 2000, when the Serow received exhaust changes and afterburner to meet new environmental requirements. This generation, unchanged, was produced until 2004 inclusive.

The export version of Yamaha XT225 lasted until 2007 inclusive, after which the XT225 series was replaced by a new one - Yamaha Serow XT250. Export modifications of the Yamaha XT225 are essentially the domestic Japanese Yamaha XT225W Serow of the second generation (1989-1993, factory code - 3RW) without significant changes.

Based on the XT225 engine, the following models were built: Yamaha ST225 Bronco and Yamaha TW225.